When does violence start?  I guess most of us agree that a violent conduct starts when we are kids.  But most people don’t know how to manage that anger when kids are growing up.  I’ll just give you an example:

One day I was at a government office and while I waited, I saw a young mother with a little boy on a stroller.  The boy was screaming and kicking.  He was telling his mom that he wanted Doritos.  His mom was trying to calm him by telling him that his daddy had left to buy him the Doritos.  But the kid kept screaming and making a huge racket that was annoying the rest of the customers that were there waiting to be attended.  Like 15 minutes later, the kid’s dad appeared with the Doritos and she gave it to the kid just to shut him up and not hear him screaming anymore.  And that’s exactly what happened.  The kid was happy because after screaming, yelling and crying, he got exactly what he wanted.  And his parents didn’t notice what they had just done….they created a “monster”.

They taught their son that if he screams, yells, gets mad and gets violent…..he can get away with anything.  What a sad lesson, right?   Just think about it, he was just rewarded with what he wanted after exhibiting a violent conduct.  Do you really think he will learn to control himself when he wants something? 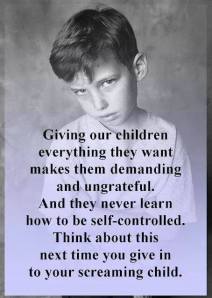 How can we fix this?

1)  Please, reward your kids when they do something right.

2)  If kids exhibit a violent conduct which disturbs other people; take them outside and firmly tell them that if they don’t behave, they will receive nothing.

3)  Avoid taking them to public places as much as you can.

4) If its inevitable to take them; establish the ground rules before you leave the house and during the ride.  Believe me, if you are consistent with your discipline, they will understand.  Kids want structure; they crave for their parents attention.

5)  Avoid using violence; but be firm in your discipline.  No means no; like it or not.  Kids will imitate their parents and if their parents are violent; they will follow in their steps.

6)  There are no Parents manual; but the Bible might help you there.  Teach your kids about God and loving one another.  Consistency and perseverance will have wonderful rewards.  Prayer and faith helps a lot too…

This is just a little of what I have learned as a mother and a teacher.  We can only be with our kids as much as we can.  But lets make the most of every moment that we share with them.  A life filled with love and encouragement of a kind nature can’t damage anyone.  Let’s be consistent.  God Bless!